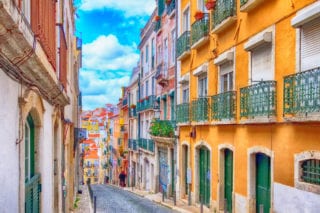 What Expats Can Expect From the Cost of Living in Portugal

The cost of living in Portugal can be summed up in one word: Great! Expats love this country for good reason. Portugal has the lowest cost of living in Western Europe. Whether it’s groceries or housing, life in Portugal just costs less. In some cases, the difference is dramatic. For instance, Portuguese residents pay about 36% less for their lifestyle than their counterparts in the United Kingdom. In fact, on housing costs alone, Portugal rings in at 50% less than the UK. And as happy expats living in Portugal attest, low cost doesn’t mean low quality of life. Portugal’s mild climate, superb wines, and beautiful beaches make for easy living. If you’re contemplating a move to Portugal, this article will help you prepare your budget and your expectations.

How Much Does it Cost to Live in Portugal?

Compared to the rest of Europe, a modest income goes a long way in Portugal. The average monthly salary, after taxes, is about 855 Euros or just over $1000. If you’re committed to living frugally, you can live for less in Portugal. Many locals and retirees get by on less than 750 Euros a month.

A couple can live in one of Portugal’s smaller cities for about $1,700 a month. While they’d have to eschew opulent luxuries, they’d enjoy a comfortable lifestyle with restaurant visits and weekend trips.

However, those based in Lisbon will find that just about everything is more expensive in Portugal’s capital. They should count on spending about $2,200 a month to enjoy a similarly comfortable lifestyle.

Housing in Portugal is exceptionally affordable. Small apartments in the interior of the country sometimes rent for less than $400 a month (though typical prices come closer to $500 or $600.) However, a similar-sized home in a trendy Lisbon neighborhood could easily cost four times as much. But these prices still represent a bargain compared to the rest of Europe.

In general, expats should count on paying about $1000 for a small apartment in the heart of Lisbon. If you want more space, expect to pay about $1,800 for a large three bedroom. If you don’t mind living outside the city center, you could save about $200 on a one-bedroom and maybe as much as $600 on something larger.

Porto, another popular expat destination, boasts more affordable properties. Expats can expect to pay about $850 for a small apartment in the city center. A three-bedroom property costs about $1450. If you don’t mind living in Porto’s suburbs, those prices drop to about $650 and $1050 respectively.

As any expat knows, rent is just one component of your overall housing costs. Anyone moving to Portugal must budget for utilities and home services. Internet packages generally cost between $30 and $40. The combined cost of electricity, gas, water services, and garbage collection generally ranges from $80 to $140 a month. Note that bills are typically issued every two months.

If you’re carefully monitoring your budget, don’t forget the cost of running air conditioning, especially in the south of Portugal. The extra electricity makes summer survivable!

Portugal has a very good healthcare system that is generally quite affordable. However, there are still important costs for expats to take into account when organizing their budget.

The first consideration is private medical insurance. In order to get a residency visa or a work visa, would-be expats must demonstrate that they have their own healthcare policy. This is necessary so the Portuguese state knows that you’re not going to be a burden on their system.

The second cost comes from the Serviço Nacional de Saúde or SNS, Portugal’s public healthcare program. In theory, participation is free, and signing up is relatively painless. Expats must register with their local council, known as the junta de freguesia. The council provides proof of address, a crucial piece of documentation for the next step of the process. Next, expats must bring their proof of address, their residence card (título de residência), and their work visa to their local healthcare center (centro de saúde) to complete the process. After filling out some forms to register with the health center, expats receive a healthcare number (número de utente). With it in hand, they have everything they need to access public healthcare services. While Portugal has universal healthcare, patients do pay a small fee with many appointments. In general, the costs are very modest and are designed to prevent patients from taking unnecessary courses of actions (like going to the emergency room for a non-urgent complaint.)

Apart from housing, food and entertainment costs usually make up the second-largest part of an expat’s budget. Predicting how much you’ll spend here is difficult. Much depends on where you’ll live and what kind of lifestyle you want.

In general, groceries for a month cost at least $200. The cost of grocery staples, like rice, apples, oranges, bananas, onions, tomatoes, and potatoes all cost less than 2 Euros a kilogram (and sometimes less than 1 Euro a kilogram). Milk, eggs, and eggs range from 50 cents to about 2 Euros. Chicken is fairly affordable at an average of 5 Euros a kilogram, while beef costs about double that.

Things that are considered luxuries in many countries, like wine, olive oil, seafood, and shellfish are produced locally in Portugal and thus are very inexpensive. You can pick up a bottle of Portuguese wine for the equivalent of 4 to 5 Euros. Domestic beer generally rings in at 1 to 2 Euros a bottle.

On the other side of things, brand name products from other countries, be it breakfast cereals or cleaning products, are disproportionately expensive.

The Cost of Eating Out

Eating out is similarly affordable in Portugal. A cup of cappuccino at a cafe costs between 1 and 3 Euros. Many cafes offer a prato do dia (lunch special or dish of the day) that costs anywhere from 8 to 11 Euros. Simple fare, like a large sandwich from a bakery, is about 5 Euros and fast food combos cost a few Euros more. Meanwhile, a multicourse meal for two, including wine, starts at about 30 Euros and up.

These are all averages. Depending on the city and the establishment, you could pay a bit less while anyone who loves trendy neighborhoods or who lives in Lisbon will pay a little bit more.

One of the biggest perks of living in Portugal is the inexpensive transportation options. A single ticket on a city transportation network is less than 2 Euros and a monthly pass is about 40 Euros. Train tickets between communities range from just a few Euros to less than 100 for a cross-country voyage.