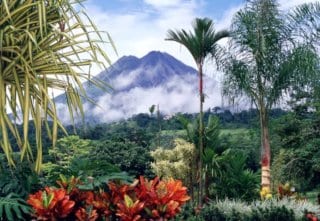 Costa Rica is consistently recognized as one of the best places to retire. And it’s not just great for retirees; young people flock to Costa Rica for its unbelievable weather, beautiful beaches, and welcoming community.

Whether you’re looking for a new place to raise a family or a laidback lifestyle to enjoy your retirement, moving to Costa Rica is a great option.

Like all countries, the cost of living in Costa Rica depends on when you live. If you’re not sure where you’d like to live, we’ve outlined the best cities in each Costa Rican province.

From the cost of housing to the price of healthcare, here’s everything you need to know about the cost of living in Costa Rica. All costs are sourced from Numbeo and were up to date as of August 2022.

In the center of San Jose, the largest and most expensive city in the country, a one-bedroom apartment costs around USD$600-740 per month. Outside of the city center, expect to pay USD$360-445 per month.

If you prefer a larger place in the heart of San Jose, you can rent a three-bedroom apartment for about USD$1,080-1,320 each month.

Basic utilities, such as heat, water, and electricity, will cost you an additional USD$56-68per month in a one-bedroom apartment. Internet and Wi-Fi access costs an extra USD$40-50.

Read: Moving to Costa Rica from the US

Food and entertainment costs are also rather affordable. Lunch for one person in an inexpensive restaurant will only set you back about USD$6-8. Dinner for two in a nicer restaurant averages USD$34-42.

When it comes to drinks, a cappuccino will cost you about USD$2.20-2.68. That may sound expensive, but remember, Costa Rica has some of the best coffee in the world.

A trip to the movies is about $5.13-6.27 per ticket. If you enjoy working out at the gym, a monthly membership to a fitness club will set you back approximately USD$38-46.

Once again, these prices assume that you’re in a more expensive area. Outside of tourist areas, locals pay a little less.

The Cost of Transportation in Costa Rica

The roads and traffic in Costa Rica are notorious, so if you do plan on driving in the city, practice defensive driving and make safety your top concern.

A Toyota Corolla or a similar vehicle is about USD$22,500-27,500. A gallon of gas will cost you USD$3.91-4.79. These prices are similar to the United States, but you’ll undoubtedly save money in other areas (like housing).

Healthcare in Costa Rica consistently ranks among the best in the world and often places higher than the United States.

Even though the country has universal healthcare, many citizens and expats opt for private health insurance in Costa Rica. With private insurance, policyholders receive quicker access to care and a more extensive selection of doctors.

How Much Does it Cost to Live in Costa Rica? (Summary)

Costa Rica is an incredible place to live, and if you’re looking to move somewhere where you can stretch your dollar, it should be near the top of your list.

With rent costing 71% less than rent in the United States, it’s an excellent way for expats, especially retirees, to get the best bang for their buck.

If you live conservatively, it’s possible to get by on $1,000 or less per month. For the average expat, expect to spend closer to $1,500 or $2,000, which is relatively cheap compared to the United States.

Compare the Cost of Living to Other Countries: