How to Get Citizenship in Another Country 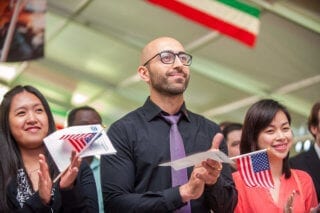 Moving abroad permanently is the ultimate goal for many expatriates. And in order to stay in another country forever, foreigners need to obtain permanent residency or citizenship in the new country.

When it comes to obtaining citizenship, every country has its own set of laws and requirements. If you’re interested in citizenship abroad, keep reading. Here’s what you’ll need to do to become a citizen in a variety of countries around the world.

How to Become a Citizen in the U.S.

People from around the world dream of becoming a U.S. citizen, but the U.S. immigration process is not as easy as you may think.

First, you’ll need a green card for five years (or three years if you’re married to a US citizen). Click here to view the requirements you need to meet in order to get a green card and establish permanent residency.

In addition to having your green card for the required amount of years, you’ll also need to be able to read, write, and speak English. When you’re ready to become a citizen, you’ll have to take (and pass) the United States Naturalization Test.

The U.S. citizenship tests are comprised of a language test (speaking, reading, and writing) and a civics test. The civics test asks 10 out of 100 possible questions. You need to get at least six correct.

Citizenship in the U.K.

As a permanent resident in the U.K., you have many of the same rights that citizens do. However, citizens are also allowed to obtain a British passport and leave the U.K. for unlimited periods of time. Permanent residents are limited to two years of leave at a time.

Another benefit to being a U.K. citizen is that you’ll be eligible to vote in parliamentary, state, and local elections. And if you have aspirations of being a politician, you can run for public office.

Obtaining citizenship in Canada can be a challenge because Canadian immigration laws are strict. The country has some unique guidelines that determine whether or not you can even become a permanent resident, let alone a citizen.

As a foreign citizen, you have to become a permanent resident before you can apply for citizenship. In addition, you can only apply if you have lived in Canada for 1,095 days out of the past five years. You also need to have filed taxes for three out of five years and paid off any tax debts that you may owe.

To become a citizen in Canada, you must be able to speak and write in either English or French, the nation’s two main languages.

You can forget about becoming a Canadian citizen if you are under a deportation order. You’ll also be turned down if you have recently been to or are in prison, on probation, or on parole.

If you love living down under, there are several ways you can move to Australia and establish citizenship. But you’ll have to follow these steps for naturalization:

Not ready to give up citizenship from the country in which you were born? Some countries, such as Ireland, make it quite easy to establish dual citizenship.

In Ireland, you can obtain citizenship just for having a grandparent that was born there. You can also apply if you are married to an Irish citizen. You must be married for at least three years and have established “reckonable residence”. That means that you must live in the country for 365 days in the year prior to applying plus two years during the four years preceding that.

Reckonable residence is also key to becoming a citizen through naturalization. To meet this requirement, you must have lived in Ireland for 365 consecutive days prior to applying plus four years during the eight years preceding that.

Read: How to Get Irish Citizenship

Like Ireland, Italy also allows you to enjoy dual citizenship if you have an ancestor who was born there. Just keep in mind that the requirements vary depending on your ancestor’s gender and the year in which they were born.

You can also obtain Italian citizenship through marriage. To do so, you must have legal residency in Italy for two years (or three years if you and your spouse live in a different country).

Italy also offers a pathway to citizenship through naturalization. Non-EU citizens can apply as long as they have lived legally in Italy for the past ten years.

Getting Citizenship in Another Country

Almost every country around the world offers a pathway to citizenship, though some make it much harder than others. Depending on where you’re from and where you’re going, you may find it easy to become a citizen or may have a long and arduous path in front of you.

Do your research to find out if you can become a citizen through ancestry, marriage, or the naturalization process. And don’t expect it to happen overnight. This process takes years.

You’ll need to file forms, conduct interviews, and pass tests on language skills and knowledge of the country’s history. Be prepared to do your research, do your homework, and be a contributing member of your new society. If you don’t, your chances of earning citizenship abroad are slim.