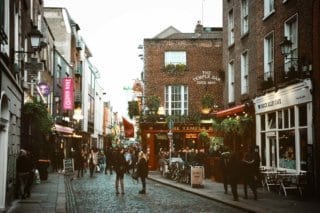 How Much Does it Cost to Live in Ireland?

A country with a high quality of life, friendly culture, and an excellent education system, Ireland is a favorite destination among expats. If you are planning to move there, you’ll want to know about the cost of living in Ireland.

As long as you can tolerate the rainy weather, Ireland is a great place to live, especially if you’re looking for dual citizenship. As long as you have Irish ancestry, it’s easy to become a citizen of Ireland and get an Irish passport without having to renounce citizenship from your homeland.

This guide covers everything from housing to education to entertainment. Get the cost of living in Ireland in U.S. dollars. Prices were sourced from Numbeo. These prices were up to date as of August 2022.

The Average Cost of Living in Ireland

As of 2022, Dublin is the 49th most expensive city in the world, and the housing prices reflect that. If you’ve dreamed of walking across the famous Ha’penny Bridge to the Temple Bar neighborhood, prepare to pay prices comparable to London or New York City.

By comparison, smaller cities are affordable, but prices are still high compared to smaller US cities. The rent for a one-bedroom apartment in a city like Galway will cost you about USD$1,200-$1,470 per month. If you go outside the city, a three-bedroom house rents for about USD$1,500-$1,850 per month.

When you are budgeting, don’t forget the cost of utilities! Heating, electricity, water and other standard utilities average USD$155-190 for a 915-square-foot apartment. If you have a larger home, expect prices to go up accordingly. Home internet is about USD$47-57 per month.

Spending a night out in the city of Dublin will cost you a bit less than a night out in New York City. You can always find affordable spots, but for the most part, bars and restaurants are rather pricey.

Pubs are a big draw for Irish people and expats, and they’re known for having good food and good beer. Dinner for two, plus a beer or two, will cost you about USD$70-$86. A beer at a bar will cost about USD$5.55-$6.79. If you are going out in a smaller city, expect to save about 10% on those costs. Depending on how often you like to go out, you’ll need to budget your money properly in order to enjoy the thriving pub culture.

In comparison to other major cities, public transport in and around Ireland is expensive. For example, a monthly transit pass in Dublin will cost you around USD$111.50-$136.30. In New York City, a monthly MetroCard costs around USD$127 as of August 2022, and NYC is one of the most expensive cities in the world.

But public transit only exists in big cities and major areas. If you plan to live on the outskirts of town or in the countryside, you’ll need to own a car. And, like transit, owning a car isn’t cheap. According to this survey, owning and operating a vehicle will cost you about USD$830-$1,010 a month in Ireland. This is due, in large part, to high gas prices. A gallon of gas costs somewhere between USD$6.64 and $8.12. If you’d like an economy car to save on gas prices, expect to pay between USD$25,500 and $31,000.

Ireland has a top-tier education system. Whether you’re an expat or a citizen, public education is free for everyone who lives within the country’s borders. However, students are often required to cover the cost of meals, uniforms, transportation, and other expenditures. This survey estimates the total cost to be about USD$1,415-$1,730 per year, while a survey on secondary school education gave estimated costs of about USD$2,620-$3,204, which includes private tutoring (called “grinds” in Ireland).

The public healthcare system in Ireland is free for certain income brackets and heavily subsidized for others, but the 58% of residents that are above the income threshold must pay for their own doctor’s visits. This is just one reason that, as of 2019, 47% of Irish residents carry private health insurance. Private health insurance also allows residents to go to private facilities and avoid long wait times.

In order to obtain most residency visas for Ireland, expats must have private medical insurance that covers the cost of a stay at a private hospital in full. An international health insurance plan is a great way to satisfy this requirement. It will cover you during your life in Ireland, and if you travel home, visit another country or want to leave Ireland for care, it will cover you wherever you are.

What is the Cost of Living in Ireland vs. the US?

When there is a major cost saving between a U.S. and an Irish city, there are also differences in what the cities have to offer. While you can save almost 40% on your cost of living by moving from Cambridge, Massachusetts, to Cork, you’ll be much further away from a major city. Cambridge residents regularly walk across the river to Boston, while Cork is two and a half hours from Dublin.

After reading this, you may be thinking, “How much does it cost to live in Ireland?” While monthly costs in Ireland are similar to major cities in the United States, living in the country makes it worthwhile. Think about the cost of housing, the cost of health insurance, and the cost of food and entertainment and plan accordingly. The beauty of the country, friendly culture and amazing history all make it worth the price.