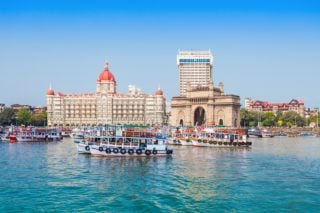 While the world-famous Taj Mahal gets the most attention, many expats find that India’s wonders never cease. The country offers a wide variety of regionally distinctive food, traditions, ancient history and vibrant cities with booming tech industries. Visitors can enjoy the stimulating and lively pace of life along with a cost of living in India 68% lower on average than in the United States.

Home to a variety of international cities with large expatriate populations and excellent schools, India can be a satisfying option for anyone looking for an affordable life in Asia. However, choosing a city that fits your financial needs will help ensure your comfort in this rapidly growing and changing country.

All prices in rupees have been converted to U.S. dollars. The data for the cost of living in India comes from Numbeo. These prices were up to date as of November 2022.

What Are the Most Expensive and Cheapest Places to Live in India?

India’s 28 states and eight union territories cover a massive range of geographic features. These include coastal beaches, fertile plains and parts of the Himalayas. The cities can vary as much as the landscape itself. They range from pricier hectic modern metropolises to cheaper, lush, bohemian cities with laid-back vibes.

Most Expensive Cities in India

Like most countries, the cost of living in India is higher in the biggest cities. For the extra cost, you get access to more amenities, entertainment and employment opportunities. Space might be the only limited commodity since some of the most expensive cities in India are also the most densely populated. Mumbai has the most expensive rent in India, yet rent is still 84% lower on average than New York City. The cities that come next on the list are significantly cheaper.

To live in the cheapest cities in India, you might sacrifice some of the big city atmosphere. What you gain, however, is access to more natural beauty and a calmer way of life with lower population density. For instance, Mumbai has more than 20.9 million people, while Bhopal has just 2.5 million.

The Average Cost of Living in India

The geography, religions, festivals, industries and former colonial influences in India can make living in one place vastly different from another. What most Indian cities have in common is high population density and low cost of living.

When compared to U.S. cities, even the most expensive Indian cities are dramatically more affordable. While the difference in cost between the most popular cities is minimal, Mumbai stands out as the most expensive for cost of living in India, including rent. Keep in mind that choosing to live just outside most cities will reduce rental costs. For example, living outside Mumbai may reduce the cost of rent by about 40-45%.

If you are a digital nomad or expat planning to work from home, you’ll be pleased to know that the cost of internet in India is low and relatively uniform across the largest cities. You can expect to pay about USD$7-$12 per month on average for unlimited data. As of 2021, Chennai had the highest internet speed in India at 51 Mbps.

Here are the average monthly prices you can expect to pay for living expenses in the most popular Indian cities and metro areas for expatriates:

Food and Entertainment Costs in India

You may quickly find food in India to be different from your local Indian restaurant back home. But you are sure to expand your horizons with its broad diversity of flavors, spices, and regional specialties. The best part? Great food and an evening out on the town won’t cost much.

The metropolises of Mumbai, Bengaluru and Delhi stand out as more expensive in this category. A three-course meal for two at a mid-range restaurant in the capital city of Delhi will cost you USD$20-$24, while the national average is USD$11-14. The food and entertainment costs in other popular cities are closer to the national average.

An inexpensive restaurant will cost you USD$2-$3 on average. Snack culture is very popular in Indian cities, and the local favorites will vary by region. Vada Pao is a staple potato-based snack in Mumbai, and the Punjabi dish Chole Bhature can be found all over New Delhi. These flavorful dishes and more can be bought cheaply at the numerous roadside food stalls, which don’t require tipping, meaning you don’t have to skimp on taste to eat affordably in a big city.

Just grabbing a drink before heading to the movies? A pint of domestic beer on draught, such as Kingfisher, will cost you USD$1.64-$2, and you’ll spend USD$3.30-$4 on average for a movie ticket to catch the latest international release.

Groceries are also affordable, another part of the low cost of living in India. A pound of white rice will cost you USD$0.28-$0.34 and a pound of potatoes just USD$0.16-$0.20. Add some chickpeas and ingredients for a curry sauce, and you can enjoy a homemade channa aloo on a night in for barely a dollar.

With so much delicious food available, you may want to take extra care of your health. Going for a run in a densely crowded and congested city may not sound appealing, but luckily one month of a fitness club membership costs just USD$17-$21 on average.

In a country of over a billion people, you can expect busy streets and crowded public transportation systems to be the norm. Despite the crowds, using buses and trains is often the best way to get around any Indian city. Mumbai, in particular, is known for its highly efficient local train system, which only stops running between 1-4 a.m.

On average in India, a one-way ticket on local transport will cost you just USD$0.27-$0.33, while a monthly pass will cost USD$9-$11. Of course, these prices vary by city. The price of a monthly pass is below the national average in Mumbai and toward the higher end of the range in New Delhi.

The heavy and hectic traffic on roads in Indian cities is notorious. Because of this, many foreigners opt not to drive and instead hire taxis as needed. Taxis are affordable, with the base fare averaging USD$0.60-$0.70. Even if you need a taxi to wait for you for an hour, you’ll only pay an additional USD$1.10-$1.40. Rickshaws are also an option for shorter distances and are even cheaper than taxis.

India’s universal healthcare system (Ayushman Bharat) provides basic care to its large population with unfortunate disparities depending on social class, gender, and location. Access is slowly increasing after an investment in establishing approximately 150,000 health and wellness centers across the country.

Unless you are an Indian citizen, foreigners do not qualify for the country’s public healthcare system and will have to pay out of pocket for care. However, the cost of care is low, and a simple or minor health issue may only cost a few dollars.

Sadly, the standard of care at public hospitals in India is often subpar. To avoid a poor experience, most expatriatess — and about 36% of Indians — purchase private health insurance that allows them to be seen at private facilities, including the best hospitals in India. When needed, these private clinics and hospitals may reduce your wait time and improve your overall patient experience.

With 40 UNESCO Heritage sites, stunning cultural and geographic diversity, and multiple modern cities to choose from, any expatriate can affordably enjoy all this vibrant South Asian country has to offer.

Deciding where to live in India requires thoughtful consideration. What you sacrifice in cost and space in the giant metropolises, you’ll make up for in access to amenities and entertainment. A smaller city can significantly reduce costs while bringing you closer to nature.

Bustling Mumbai is the most expensive city in India. But it still doesn’t come close to the cost of the most expensive American city. If you’re looking to avoid the crowds and enjoy a calmer city culture with the lowest cost of living, smaller cities like Vadodara or Chennai should be on your list.

The difference in the cost of living in India vs. the U.S. is tremendous. Most expats and digital nomads will find their paycheck goes far in India – even in the more expensive cities. Wherever you land, India holds a treasure trove of experiences for all of the senses…and easily fits a tight budget.