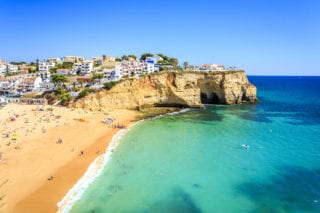 Best Places to Live in Portugal

Whether you are considering studying, working, or retiring in Portugal, the country has something for everyone! With Portugal having the lowest cost of living in Western Europe and sunny weather and mild climate for most of the year, it is no wonder that many people are researching the best places to live in Portugal and making it their second (or primary) home.

Renting an Apartment in Portugal

Before we jump into our list of best places to live in Portugal, we want to share a few words about the procedure of renting an apartment here. Depending on the apartment location, you can find furnished apartments to rent starting from as little as EUR 500 a month, up to EUR 1,200, and more for more luxurious ones, especially if located near the coast or featuring a sea view.

Singing a Rental Contract in Portugal

When signing a contract as an expat in Portugal, you need to show a copy of your passport and proof of income (such as your last payslip or tax return showing the Portuguese fiscal number). In addition, you will be asked to pay a usual two monthly deposit, which will be returned to you at the end of the contract, which usually lasts two years.

Best Places to Live in Portugal (With Rental Prices)

Now that we know the procedures to expect when finding a new home in Portugal, and the expected price range, let’s jump to the list of the best places to live in Portugal for expats! 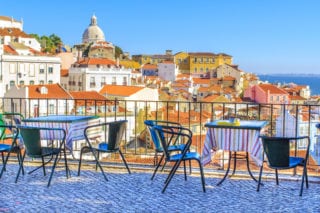 Portugal’s capital and largest city, Lisbon, is the obvious choice for expats looking to move to the country and hope to find a great work opportunity. Large multinational companies are opening their offices here, creating job opportunities in the field of e-commerce, fashion, technology. Google, Amazon, Mercedes Benz, and German fashion e-commerce giant Zalando have opened their offices in Lisbon.

The city itself is a combination of cobblestone streets, large monuments and shopping boulevards, bustling nightlife, and a never-ending array of charming cafes, making it an ideal city for active and city-loving expats who want to work and play in one of Portugal’s most exciting cities. Lisbon also has an excellent public transportation network consisting of trams, buses, and four metro lines across the city.

A second-largest city after Lisbon, Porto is located along the Douro River estuary in northern Portugal. Considered as the true center of arts and culture, Porto is a rival to Lisbon regarding tourist attractions and numbers. There are plenty of work opportunities in the entertainment and tourism sectors for expats and the IT sectors. Porto is also the birthplace of the famous Port wine, and many cafes, restaurants, and wine cellars offer port and other wine tasting sessions.

Chaves, meaning in Portuguese “keys”, is named after its close location to the Spanish border in the North of Portugal and its function as a gateway to Portugal. Chaves is a popular SPA resort, famous for thermal springs, offering Europe’s hottest bicarbonate waters. Because of Chaves’s proximity to the mountains, the temperatures don’t go very high during summer, making it a beautiful and peaceful location to retire, or take a break for a couple of months, at least. The cost of living in Chaves is very wallet-friendly, too. 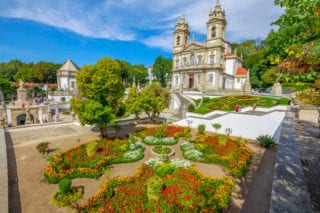 Braga is Portugal’s third-largest city, after Lisbon and Portugal. Situated in the northern part of the country, it is a perfect combination of a laid-back living with work and study opportunities. Braga is the oldest city in Portugal, set up in the year 20 BC by Roman Emperor Augustus, and it is home to the world-famous 18th century Bom Jesus do Monte shrine. It is a city filled with history and architectural pearls.

In terms of work opportunities, roles of web developers, IT technicians, and sales and customer service support (in multiple languages and not in call centers) are available and popular in Braga. Braga is also closely located to Porto, only about 45 minutes by car.

1-bedroom apartment in City Centre: EUR 500 – 650
1-bedroom apartment outside the City Centre: EUR 300 – 500
Coimbra
Coimbra, Portugal’s official student city is located between Lisbon and Porto, is also home to Portugal’s oldest and most prestigious university, the University of Coimbra. With a high quality of living, which is considered peaceful and laid-back, Coimbra has an established expat population and is hugely popular among retirees. A large student population adds vibrancy to this old, typical Portuguese city. It offers beautiful city views and atmospheric streets to wander, and it features the famous Joanina Library; and for more active citizens, you can reach a surfing spot in Nazare within an hour. 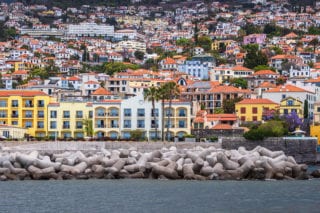 Madeira is the largest of the Portuguese islands and offers a pleasurable, year-round subtropical climate, a beautiful coastline, and a range of five-star leisure facilities and hotels.

The island is a popular tourist and second-home destination, especially among British and German citizens. There are also art museums on the island, churches with organ music festivals, and cities hosting food and folk festivals throughout the year to entertain locals, expats, and tourists alike.

Madeira’s capital, Funchal, has been named the second-best city to live in Portugal; in our opinion, it is because of the high quality of life, where the vibrant cosmopolitan city-life meets a calm island lifestyle in perfect harmony. Main jobs in Madeira oscillate within the tourism industry, and many people chose to live here while working as entrepreneurs.

Faro is the main city of the Algarve region in southern Portugal. It is a popular retirement destination for many expats, like the city, and the Algarve region in general, which offer delicious food, wonderful weather, and plenty of sea and sun to relax and play. It is worth noting that Faro is a very comfortable city to live in. Rental prices are cheaper than Lisbon, while Faro is only a two-hour drive from the capital. Faro has a well-developed infrastructure, including a public transportation system and healthcare facilities, convenient shopping, and proximity to some of the most beautiful beaches in Portugal.

The above list our team’s pick of best places to live in Portugal for expats, be it for work, retirement, or just an adventure. We recommend those looking to move to Portugal and wor there to choose larger cities to live where job opportunities are plenty, and those thinking of retiring to opt for more tranquil, yet well-developed locations with a budget-friendly cost of living in Portugal.