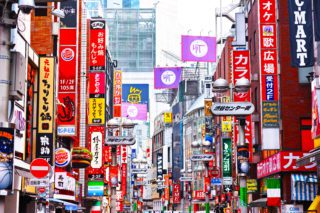 There are plenty of job opportunities in the Land of the Cherry Blossom, and what attracts others is Japan’s rich culture, traditions, and delicious food. People moving to Japan can choose between living in one of the megacities or in the serenity of more rural places in Japan while enjoying one of the lowest crime rates on earth, a highly sufficient nationwide transport system, robot fights in Tokyo, and a year joyful Pikachu parade in Yokohama.

5 Best Places to Live in Japan as an Expat

Approximately 32% of all expat residents live in just three areas: Tokyo, Nagoya prefecture, and Osaka. Many foreign workers come to Japan to work for one of the biggest companies in Japan, such as Toyota, Mitsubishi, and Honda. There is also a considerable financial sector in which expats often work too.

Read: Cost of Living in Japan

Tokyo has the highest population density of any city in Japan, and it’s home to almost 14 million people. It’s Japan’s capital and cultural, political, and financial center of the country. Living in Tokyo offers the perfect mix of high-tech and traditional, making it one of the best places to live in Japan. Business centers, high-rise buildings, and massive shopping areas entwine with peaceful residential streets, Japanese gardens, and an occasional sight of a Geisha in the park.

Most expats working for international companies live in Central Tokyo – mostly in the areas Minato-ku and Shibuya-ku. These areas are the business centers of Tokyo, with multinational companies having their offices located there. These neighborhoods have international hospitals and shopping centers, restaurants, and other businesses and facilities focused around expats and English-speaking clients. There are also numerous international schools and residential properties built in western style for expat families in these safe and convenient areas.

Minato-ku, in particular, is considered one of the most international areas of Japan. Areas within Minato City include Omotesando, Harajuku, Roppongi, Hiroo, Shirakane, and Akasaka.

Shibuya Train Station is one of the best-connected ones in Tokyo, making living in the area extremely convenient. Luxurious residential areas such as Hiroo, Shoto, Yoyogi-Uehara are located in Shibuya City. In addition, there are trendy shopping areas such as Daikanyama, Ebisu, Shibuya, and Omotesando. The famous, biggest street crossing, Shibuya Crossing, is also located in the area. It is said that at a time, about 3,000 people are crossing each time the pedestrian light goes green. Shinjuku, one of the most popular, crowded, and largest shopping areas in Tokyo, consists of several electronic stores, markets, and malls; it is located north of the Shibuya-ku.

North of Minato-ku, Chiyoda City, is a calmer part of the city. The Imperial Palace, the National Diet Building, the Prime Minister’s office, and residence, and the Supreme Court are all located in this neighborhood. Besides government offices and foreign embassies, many multinational corporations have their offices in the area. Residential areas of Chiyoda-ku are called Bancho, Kojimachi, Kudan, and Ichigaya. During the Edo era– samurai and other feudal lords lived there, and the neighborhood is still home to remnants of the Edo era.

Meguro City is popular among expats as it offers a well-organized and convenient living environment. This popular, well-developed residential area is located near central Tokyo, making it a very convenient place to live. You can find fashionable shopping areas such as Jiyugaoka and Nakameguro. In the northern part of the city are academic areas such as Komaba and Ohashi, as well as high-class residential areas like Aobadai. Living in Meguro-Ku is definitely not cheap, but residents pay for peace and convenience anywhere in the world. 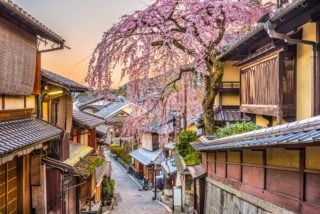 As a popular tourist destination and cultural center, Kyoto is home to over 60,000 expats, who work in hospitality. The city of Kyoto is famous for its classical Buddhist temples, gardens, imperial palaces, Shinto shrines, and traditional wooden houses. Tourists come here from all over the world to experience the Japanese calmness and food, such as Yudofu (boiled tofu), Hame (eel dish), and Tsukemono, which can be found in the city’s most famous market – Nishiki.

Kyoto’s bus and train system is excellent, with direct bus and train lines to Osaka that can take you there in about an hour by bus or approximately 30 minutes by train. Kyoto is a great city for those who enjoy the perks of living close to the Japanese temples and gardens while being just a little while away from the typical Japanese big city life.

Yokohama is located south of Tokyo, and it takes approximately 30 minutes by train to travel between cities. It is, of course, a cheaper location to rent a place and live; therefore, some expats chose to locate there while working in Tokyo. In addition, families with children (not only expatriates) often decide to move there due to the city’s affordability and peacefulness.

Yokohama is now the 2nd largest city in Japan, and it has a population of over three million people, with approximately 90,000 expats living there.

Yokohama is a prosperous trade and port city. Yokohama is famous for the “Chinatown” – an area with over 500 shops, restaurants, and other Chinese businesses – making it the largest Chinatown in the world. It is also famous for its museums, including Cup Noodles Museum, Sankei-en Garden, and a futuristic waterfront Minatomirai.

Osaka is Japan’s 3rd most populous city, and also living here can cost you about 30% less than in the capital city Tokyo. Osaka is famous for its friendly residents; however, not many speak English, and expat job opportunities here are few, with only about 23,000 expats living in neighborhoods of Umeda, Namba, and Nishi-Ku. Osaka and people in Osaka are also known for their food, such as okonomiyaki – a Japanese-style pancake containing chopped cabbage and takoyaki – a specialty dumpling with octopus. Osaka is also known for having a very robust nightlife scene. 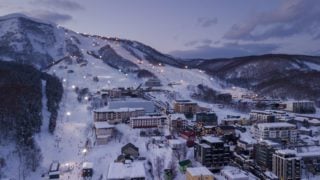 Sapporo is the fourth most populous city in Japan, with about 15,000 expatriates living in it. It is located on the country’s northernmost main island of Hokkaido, and it’s a popular skiing destination for locality and internationally. In addition, the Sapporo beer brand comes from Sapporo; however, the city is also famous for Miso Ramen and the cherry blossom viewing, from mid-April to early May each year. Expats live in Sapporo because of its milder and cooler weather, extraordinarily efficient and well-organized transportation system, and lower living costs compared to Tokyo, Osaka, and Yokohama – another reason it made the best places to live in Japan list.

Not many people speak English in Sapporo, so it could be a great place to live in Japan for those who want to learn Japanese. Job opportunities within Sapporo for expats lie in information technology and tourism.

Other Best Places to Live in Japan

The top five best places to live in Japan in our list consist of large cities, with plenty of job opportunities, entertainment, food, and sightseeing options for the international residents. There are, of course, other unique places in Japan for expatriates, more low-key and local, such as beautiful Okinawa for more relaxed beach life, or Kobe, for fresh mountain air and stylish and spacious city landscape. The best way to find which place is ideal for you is to move to Japan and see it for yourself!