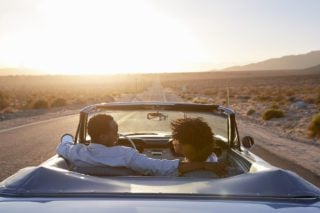 Even though going to live in a new country is exciting, expat depression can become an issue for anyone living in a new place. That includes family members of expats and in particular, spouses. If you’re living abroad with your spouse, use these tips to help them understand, overcome and avoid feelings of depression or isolation while abroad.

Spouses of expats are even more likely to suffer from isolation, depression, and loss of identity sometimes called trailing spouse syndrome.

The term trailing spouse was first coined in 1981, by Mary Bralove in the Wall Street Journal. It refers to the partner, typically a wife, of a person who moves or is transferred overseas for work. Some people find the term unflattering, because “trailing” sounds passive and meek. But the term was deliberately designed to describe what it feels like for spouses who follow their partners abroad. Expats and their spouses often leave behind careers, friends, and family at home. And as a result, they can feel lost.

Let’s talk about some of the features of trailing spouse syndrome, and ways you can help avoid it.

Also Read: How to Avoid Common Ways of Getting Sick Abroad

Like expat depression, trailing spouse syndrome isn’t an official diagnosis. But it does describe a set of issues that spouses of expats often face. Often it comes as a result of not being the person who made the ultimate decision to move abroad.

Spouses of expats have many reasons for traveling with their partners abroad but it can be difficult to leave their home behind. A spouse may have left a career behind in their home country. While they are abroad, they may have to sacrifice their professional goals. They might not speak the language, be able to obtain a work visa or have the ability to get a job in their field in the new country. Or they may have to start a new line of work, which can be difficult in a new place, especially if there is a language barrier.

Family problems are also common. A spouse may have left supportive family members behind, whether parents, siblings or other relatives. Even if a spouse didn’t have strong family ties at home, the marriage might be strained by the isolation of a new place, where the couple only has each other for company.

Children can also suffer the loss of their familiar surroundings and social ties during a move abroad. They often become more dependent on the parent who’s around the most which can be difficult for said parent. A spouse who can’t work in the new country may become the sole caregiver for the kids. This can make a spouse feel even more isolated from other adults.

While the expat who moved on a work assignment has the structure of work and colleagues to ease the transition, the spouse probably doesn’t. Expats always have to build a new social life, but spouses don’t even have work friends to lean on.

All of this can lead to trailing spouse syndrome: a kind of expat depression.

Effects of Being a Trailing Spouse

Trailing spouse syndrome has a lot of the features of depression. Loneliness due to isolation from familiar people is a common problem. Many spouses of expats also face lack of direction, especially when they have to abandon careers. But the biggest difficulty for expat spouses tends to be loss of identity.

Loss of identity can set in when a person leaves their home and also leaves one or more of the things that define them. These can include career, family, social and religious groups, community activities and hobbies, managing a home, and more. When a spouse follows an expat on assignment, but has no assignment of their own, they may feel aimless, and disconnected from all the things that previously made up their life.

Imagine you are a high school English teacher who swims with a gym buddy three mornings a week, plays in a regular tabletop roleplaying game with friends, and volunteers with the local food pantry. Your spouse has a high-powered job and gets a plum assignment in Singapore. If you go along, it’s bound to be an exciting adventure. But you also give up your job, your students, your workout partner, your gaming friends, and your connection to meaningful effort in your community. Losing all of these things together can make a person feel lost, without a connection to who they are.

Traditionally, the “trailing spouse” was nearly always a woman, whose husband was whisked away to a foreign country for his job. The majority of trailing spouses are still female, but there are more trailing husbands all the time.

The issues that men and women face as spouses of expats are similar, but there are differences due to cultural influences and expectations. A trailing wife may leave a career and wind up caring for the kids in the new country. But because of social expectations around childcare in many places, her loss of identity may not be noticed or taken seriously, which makes it worse. A man who leaves his career and becomes a full-time caregiver might feel loss of identity as well, but due to the expected role of men in the family, he may face shame on top of it—which also makes it worse.

Regardless of who is the primary expat and who is the trailing spouse, these situations can also lead to relationship problems for a couple. If a trailing husband was a breadwinner or career man back home, he may feel useless or unlike himself without work. Depending on how “macho” the culture is where the couple moves to, he can also face disapproval, even ridicule, from other men he tries to befriend. Feeling suddenly dependent on his wife can cause particular relationship strain.

For a trailing wife, a move abroad may mean having to depend financially on their partner. That can cause feelings of depression and lack of control. So can the feeling, for either partner, that their spouse is their only social outlet. Often a feeling of imbalance whether due to long work hours or lack of social life can cause issues for an expat and expat spouse.

How To Help Your Partner Avoid Trailing Spouse Syndrome

One common recommendation for expats is pre-assignment family counseling. This can happen before you travel, or early in the assignment. Your employer should provide this kind of counseling. You’ll learn how basic things work in the country you’re moving to, such as education, healthcare, and the norms of the culture. Having some grounding and guidance when you’re adjusting to your new home can really help. It’s also a good idea for you to talk to each other, openly and extensively, before making such a big move. Counseling, or even focused couples therapy, can help if you’re not communicating that well.

Another thing you and your spouse can do is learn the local language. Learning the language has obvious advantages when you’re living somewhere new, and will help both of you get around, be productive, and meet people. But learning a language together is also a bonding experience that can make your relationship stronger.

Learning about the culture before you go is also a great way to make things easier, especially for a spouse who doesn’t have a workplace full of colleagues from their own culture. A little bit of knowledge about typical business hours for shops and restaurants, what’s considered polite or rude, how people tend to dress, or what the local delicacies are can go a long way. Having some connection to the culture before you arrive makes everything feel a little less overwhelming.

Finally, it’s important for a trailing spouse to have something to focus on. Sometimes it’s possible for a trailing spouse to continue his or her work in a new place, particularly if they’ve been working remotely already. But if it’s not possible to continue working or get a work permit, then some other focused activity is vital. Whether this is a volunteer gig, an online business, a language course, or training for a new career, doing something that feels useful is a key way to stave off depression.

Remember: all the things that are true about expat depression are also true for spouses of expats. Look out for social isolation, culture shock, lack of a support network, and any changes in routine or habits. It can be harder to notice changes in yourself than to notice them in a partner. A huge benefit of going abroad with a spouse is that you have each other to go to for support. Talk to each other a lot, take care of each other, and refer to this article [link to article] for more detailed tips on avoiding and treating expat depression.