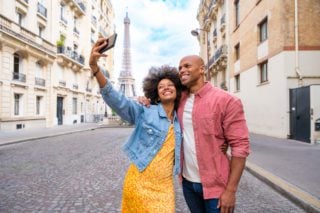 Thinking about spending some time in France? The country has a large population of expats and digital nomads, especially from the UK, due in large part to its refined culture and world-class education system.

The country also has an extremely rich history. Because of this history, France developed bizarre customs and stories that make it one of a kind.

Not sure what we’re talking about? Continue reading for 31 fun facts about France that will get you excited to make the move.

1. France has 12 different time zones, which is more than any other country. This is due to the overseas territories of France like French Guiana in South America, French Polynesia in the Pacific Ocean, Mayotte in Africa, and several other territories across the globe.

4. The French Army is the only army that still uses carrier pigeons. The pigeons, which were last used predominately in World War I are kept around in case “electromagnetic war” crashes all modern communication channels.

5. Speaking of the French Army, they were the first army to use camouflage. The word camouflage stems from the French word for “disguise.” It was first used by military personnel in World War I.

6. Paris, France was the first city to implement a public transportation system. Horse-drawn carriages were publicly used as early as the 1660s. The city now has an extensive rail, tram, and bus system.

Also see: The Cost of Living in Paris

7. France favors roundabouts over stop signs. In fact, they have about 30,000 in the country, which is more than half of all roundabouts in the world. According to studies, roundabouts reduce the overall number of collisions and the seriousness of collisions.

8. It’s against the law to name pigs “Napolean.” Napolean was a military leader in France in the early 1800s.

9. Did you know that Napolean wasn’t actually short? Despite popular belief, the famed leader was actually about 5 foot 7; which was decisively average.

11. Based on land mass, France is the largest country in the European Union. The country has an area of 551,000 sq km.

12. The shortest reign of any king? Louis XIX was king of France for only 20 minutes until he stepped down and placed his nephew in charge.

13. King John I of France is another interesting story. John I was named king before his birth and held that title for five days until the infant passed away.

14. It’s legal to marry a dead person in France… as long as you can prove they intended to marry you while they were alive. This right was last exercised in 2017.

15. Grocery stores are not allowed to throw away unsold food in France. Instead, markets are required to donate unused food to the needy.

16. The highest mountain in all of Europe is Mont Blanc in the French Alps. It stands 4,810 meters tall (roughly 15,780 feet), which is taller than any mountain in the continental United States (but not taller than the mountains of Alaska).

17. France is home to some of the most expensive wines in the world. In fact, several high-profile bottles of vintage vino sold for well over $200,000.

19. French people eat 40,000 tons of snails each year. The delicacy, more commonly known as escargot, is typically prepared with garlic and butter.

20. While we’re on the topic of snails, in 2008 one man was fined for not having a ticket for his snails on the train.

21. There is said to be up to 450 distinct types of cheese made in France.

24. Potatoes were illegal in France from 1748 until 1772. The French Parliament outlawed the food because they thought it caused leprosy and other diseases and illnesses. If you’re curious to learn more about the interesting history of the potato, read up on the life of Antoine-Augustin Parmentier.

25. Some areas of America love a good beauty pageant. The French do not hold the same sentiment. In fact, pageants for young girls were banned in the country in 2013 due to the way they “hypersexualize” young girls.

26. The French language is not just used in France. There are 29 independent nations where French is an official language. The majority of these countries are in Africa, but Canada, Monaco, and Haiti are on the list as well.

Related: How to Find a Great Language Tutor Abroad

27. If the “champagne” you’re drinking is not from France, it’s not champagne. In order to be real champagne, it must be produced in the Champagne region of France.

28. The average person in France sleeps nearly nine hours a night, which is more than any other population.

29. The Louvre, a now-famous art museum in Paris that is the largest in the world, was originally built in the 12th century to protect the city from English soldiers.

30. Free soda refills are outlawed in France. The ordinance was put into place in 2015 to combat the rising obesity epidemic.

31. France has a long history of cultural acceptance. The city of Paris elected the first mayor of African descent, Severiano de Heredia, in 1879.

As you can tell, the history of France has created a rich culture. It has its quirks, just like any nation, but overall it’s a tremendous place to live and visit.

The French are well-known for the love of wine and cheese. They are also a very progressive culture that is on the cutting edge on a lot of social and environmental issues.

We hope these fun facts pique your interest in France. If you’d like to learn more about moving there, read our full guide on immigrating to France.