For US Citizens Moving Abroad: 5 Secrets to Minimize Your Total Taxes 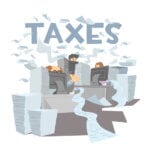 To simplify tax season, we’ve outlined our top 5 pieces of U.S expat tax advice to minimize your taxes and ensure that you avoid the most common tax penalties that U.S expats face.

Those who began their expat life within the past year may be eligible to deduct various moving expenses when filing their taxes. The IRS Page for US Citizens Abroad advises U.S citizens to deduct moving expenses incurred “when starting work at a new job location”. A full list of deductible moving expenses can be found here. Filing moving expenses is as simple as filling out a Form 3903 (link to https://www.irs.gov/pub/irs-pdf/f3903.pdf).

One of the most common mistakes made by American expats when filing their taxes is to neglect U.S state taxes. After moving abroad, you must prove that you are no longer a resident of your previous state in order to avoid any form of state taxes. Most states will release you from residency status if you can prove your residency in another place for more than 6 months of the year. However, California, New Mexico, South Carolina, and Virginia do not make this easy. In order to be released from residency status in any of these 4 states, you must prove that you will not be returning to that state as a resident.

U.S citizens working abroad may qualify for exemptions on their foreign income, which may enable you to avoid U.S taxes on a large percentage of your total income. This exact foreign income exclusion amount is updated annually based on inflation, but sat at $100,800 in 2015 and $101,300 in 2016.

Those who work in a foreign country may be eligible for social security tax exclusions. The United States has tax treaties with dozens of countries across the world. If you currently live in any of these countries, you may be exempt from paying social security taxes to the U.S.

Filing taxes as a U.S expat can be complicated, but these 5 secrets should leave you adequately prepared to face tax season. Looking for additional expat advice? Follow us on Facebook and Twitter for the latest expatriate news and advice.